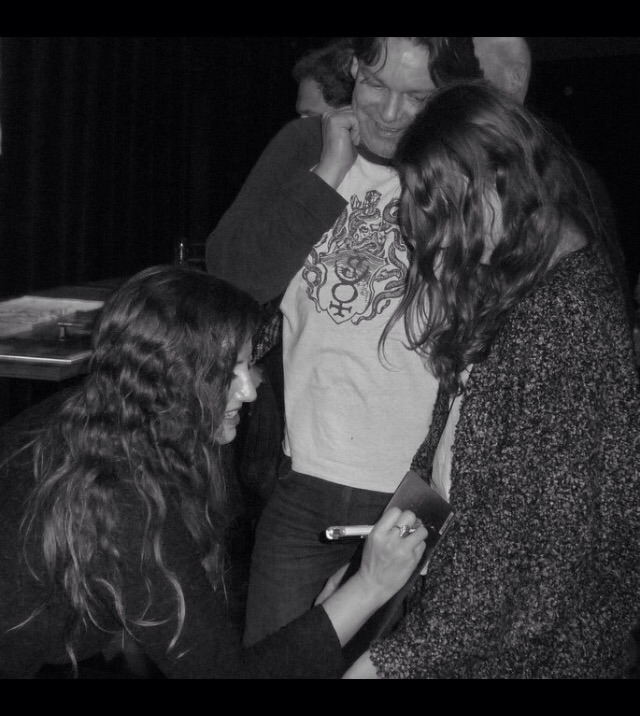 Roy Kleijn is the kind of fan you want to have- he’s enthusiastic and really positive, but he doesn’t get stars in his eyes or act weird. I guess that in some ways, being a great fan is like being a good neighbor, and I feel like that’s the way Roy has related to me and my band. Roy has honestly looked out for me- he noticed when ANTI- records had my website wrong, and offered me some solid advice about getting my old domain back (my legal name is being squatted, so I took joliehollandmusic.) He brought his cute teenaged daughter to my show (was this taken in Rotterdam?- I love how our hair looks so similar and mermaid-like in this picture.) That’s Roy standing between us.

I used to live in a building in Brooklyn where three floors out of four all knew each other. There was a pretty amazing sense of community between the three floors- we fed each other, dragged each other’s packages up the stairs, threw parties together, and weathered one hurricane and one earthquake together. Our super was some intense character who threatened to burn the building down, so I even went to make a police report with my building mate. The upstairs neighbors, two out of the three that lived in that apartment were circus performers. Sometimes the lady who lived directly above my room would tap dance till four in the morning, and I Honestly never minded. The city was loud anyways and if I really wanted to go to bed before four, I had earplugs. One time my friend’s parents rented my place when I was on tour, and I asked the dancers to try to not go past midnight. The circus performers kept a curfew the whole month, sweet as pie. We lent each other clothes, and if somebody looked better in something than the original owner did, we often let them keep it. I had this beautiful marching band hat that my clown buddy upstairs really rocked as part of some scandalous dance number, and even though I’d really loved that hat for years, I gave it to her. Why do you keep cool things lying around? Isn’t it better to let them flow to where they’re needed?

Roy had this pristine hundred year old top hat in its original box that he brought me to the last show I played at Paradiso in Amsterdam. I don’t know why, really. Simply out of the goodness of his heart, because he knew I’d appreciate it. I wrote that song ‘All The Love’ on my last record where I mention an ‘old top hat on the stand.’ I didn’t have a top hat- the lyric is a reference to an imaginary altar for Ghede, in the Haitian and New Orleans traditions, where the costumes of the Lwa are maintained. Should the Lwa ever possess anyone, their attire is at hand. In the context of the love song, it’s a metaphor for carrying a flame.

The hat Roy gave me is one of the prettiest things I’ve ever seen. The sheen of the deep black sheared beaver pelt is as deep as the pupils of your eyes. Fittingly, the hat fits pretty much no one, so it’s strictly like a ritual object, just as the song implies.

Roy lives in the Netherlands, half a world away from the States, but he’s managed to somehow, vibe-wise and in deed, to be a like great neighbor. Instead of inviting him to parties, my only recourse is to try to give a great performance whenever I’m in the Netherlands, or on any stage anywhere.