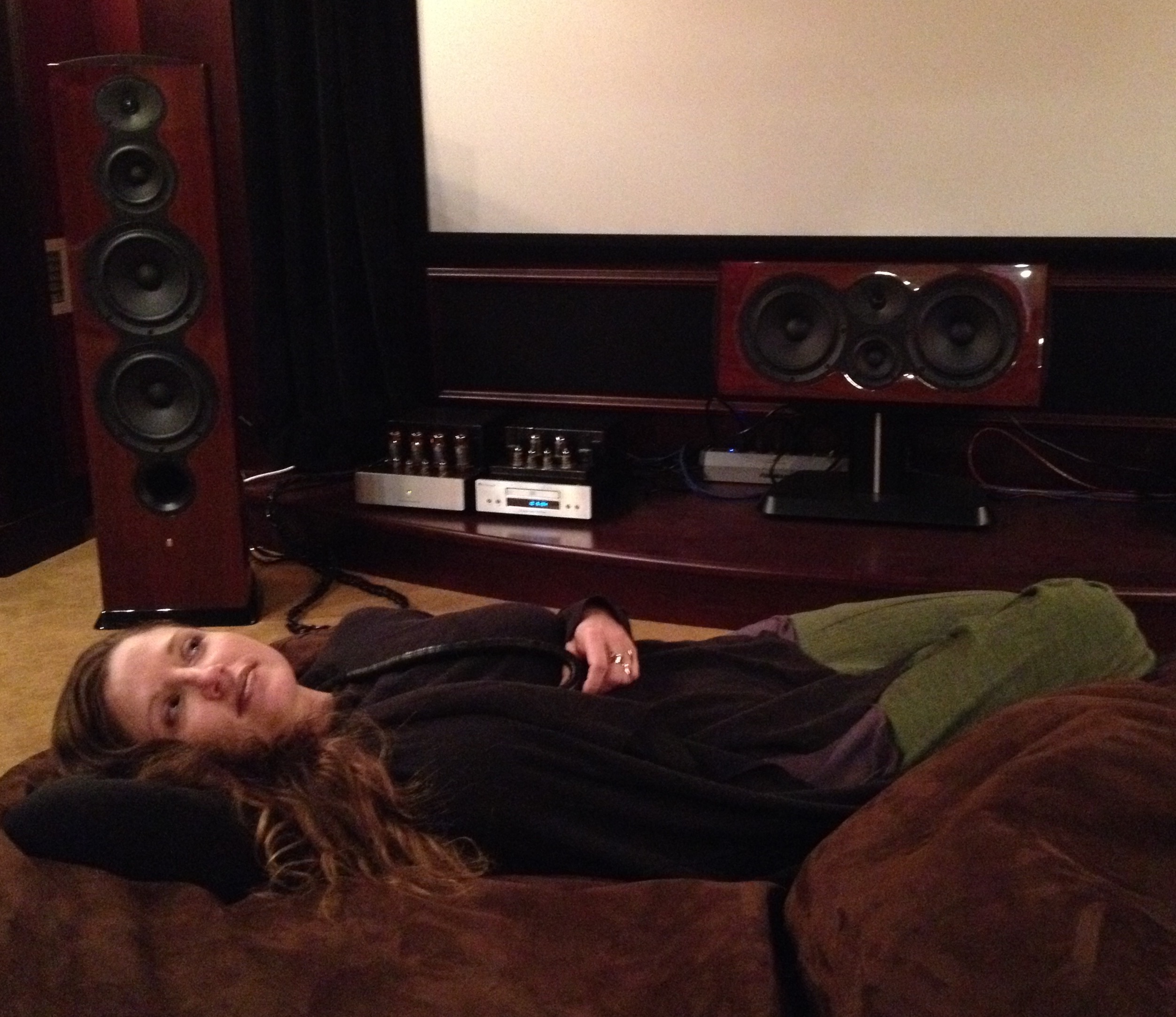 This is a photograph of me in an intense state of unaccustomed bliss. I was at Jason Tavares’ HiFi shop upstate New York, listening to music on their gazillion* dollar sound system. I was overwhelmed with beauty. I had to get up and leave a couple times because the feeling was so strange and powerful. Imagine if you had never eaten ice cream, if you’d never had a massage. Hearing that top-of-the-line HiFi was an absolutely new sensual experience for me. I was so moved. I was afraid I might get teary eyed in front of people I’d just met.

{*By gazhillion I mean the systems they had up in the showroom were worth tens of thousands of dollars.}

Jason Tavares has been a consistent presence on my facebook page for years, and one day he said he was going to give me a HiFi system. I really didn’t know what to think. People can say nice things, and you don’t know what to believe. Without knowing him, I just tried to take it at face value and not expect much. But Jason is a really straight up, stand up guy, and he meant exactly what he said.

I finally met Jason outside the book of face by playing a house show tour. Jason suggested that we play a set in his wife Adela’s painting studio. It was an honor to be in her space. Adela’s a great painter. My bandmate Adam Brisbin and I played electric guitars with the amps turned down low, and we sang acoustically. That’s a pretty good way to go if you can swing it.

The next morning, Jason and Adela took us to the HiFi shop Jason founded, Adirondack Audio and Video in Queensbury. My mind was blown. I’d never heard recordings so clearly, except maybe in the context of mixing a record. It was such a powerful emotional experience for me.

Somehow, Eeyore like, I never expected to actually get a HiFi. But Jason is for real. He sent me every component, from a new turntable down to some sick-ass flat copper speaker cables. I had moved to Los Angeles in a suitcase, into a studio apartment, so I don’t have much. The HiFi really makes the place feel like home.

Jason tells me he’s sold many a gazhillion dollar, high-end system by playing my records, and that hooking me up with a nice HiFi is his way of giving back. I’m awestruck with gratitude. It’s hilarious to listen to low down recordings like The Basement Tapes on these speakers. You can hear so much detail and depth.

When I passed though the Northeast on tour opening up for my friend Gregory Alan Isakov, I got to see Jason and Adela again because they invited me to stay with them. Their four year old daughter Sophia is super shy and adorable. She had a song she wanted to play for me, so we all went upstairs to her room where she has a tiny toy piano, the same kind of piano I had when I was her age. Sophia plunked out this short melody on the plastic keys. It was terrific surprise to me, and neither Jason nor Sophia knew the significance, but Sophia played me a song I wrote when I six, actually the first song I ever wrote, on the same kind of toy piano I’d written it on. I hadn’t bothered to give the song a name until 21 years after the fact, when I recorded it as an intro on Escondida. It’s the ‘Tiny Idyll’ before ‘Lil Missy.’ I only recorded it because they happened to have the same model toy piano in the studio. It was just too uncanny, hearing this song I’d written as a child being performed by a child on the same instrument. I guess I overwhelm easily, and my life has been a bit overwhelming at times. I think I’m still taking that moment in, when Sophia started to play me the first song I ever wrote.

Jason just opened up a showroom in Manhattan. I highly recommend checking one of his shops out. Even if you’re not a gazhillionaire, you might need some amazing speakers or headphones.

Jason Tavares is a Prince and a great soul. I’m so grateful to have fans like him.

Jason’s HiFi shop is called Adirondack Audio and Video, adkav.com. Their two locations are Queensbury, NY and in Manhattan. The showroom in NYC is by appointment only. I think my band and I will put on a little performance there sometime soon. I’ll let you know.